A seizure is a burst of electrical activity in the brain caused by nerve cells firing together, often as a result of injury to the brain. Seizures in both term and preterm babies are common but can be difficult to diagnose and treat as often the clinical signs can be subtle or absent.

Instead of using a single light source and detector, we have used a multi-channel system, developed by the UCL-BORL. This enables changes in blood flow and oxygenation to measured in different parts of the brain.

We have developed a specialized ‘optical-EEG’ cap containing both light and electrical sensors – in this way we can measure both the electrical activity and associated changes in blood flow in the brain: a process known as neurovascular coupling. 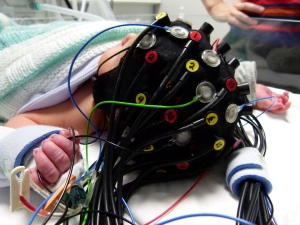 We have studied a number of infants with seizures and for the first time shown how during a seizure there are profound and sustained falls in blood volume associated with seizure activity (images below) (Singh et al, NeuroImage Clin, 2014).

The system was broadcasted on national television in 2014 and can be viewed below: